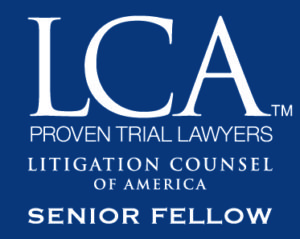 Gregory R. Brown is a shareholder and co-founder of the firm, practicing in the area of civil litigation. He has attained an AV preeminent rating from Martindale- Hubbell which is the highest possible rating. Mr. Brown has over 43 years of experience representing clients in all aspects of civil trial law, including extensive jury trial and appellate work.   Many of his cases involve the defense of tort claims against electric utilities.  He is a Senior Fellow, Litigation Counsel of America, and was featured for successfully defending an 8.5 million claim brought against an electric utility.

Mr. Brown has been selected by the American Society of Legal Advocates in recent years as a Top 100 Litigator Lawyer in the State of Iowa and was recognized as its National Lawyer of the Month. He was previously selected by the BTI Client Service All-Star Team after being nominated by a Fortune 1000 client for outstanding and superior client service.  Mr. Brown was a speaker at several seminars when Iowa first adopted Comparative Fault and presented several articles on Iowa’s adoption of Comparative Fault.

Outside of the firm and his practice his activities include swimming, biking and running although his times have slowed considerably since he placed 34th overall in the 1986 Ironman Triathlon World Championship in Kona, Hawaii.